Sas Malumby, driver par excellence for Kildare Retired Teachers’ trips, collected us promptly at designated meeting spots and with luggage stowed on bus, we hit off for the (reportedly) sunny South East!

The Waterside Restaurant in Graiguenamanagh on the banks of the Barrow was our first port of call for refreshments. The Brennan brothers had worked with the owner some years ago and the positive results were very obvious.

A tour of Duiske Abbey followed. The abbey originated in the 13th century and is probably the finest f the Cistercians monasteries in Ireland. It is now the parish church of Graiguenamanagh.

I was particularly fascinated by the Tidy Towns Committee project “Clerical Whispers” to place 12 life-size granite sculptures of cistercian monks in various locations around the town. Each monk characterises a monastic activity – this lad is a weaver!

Peter Cushen, the current owner of Cushendale Mills which has been in his family for generations presented a very interesting demonstration of the workings of the mill. I decided to give the hill to the mill a miss and retired to the Waterside and wait for lunch.

Next stop – New Ross and the Dunbrody Famine ship. I had been there a number of years ago but there’s been a revamp of the whole exhibition with a renewed emphasis on emigration linked to the present day! Well worth the visit!

The Tower Hotel Waterford was our final destination. Rena had done her homework well as this is a very centrally located hotel, friendly staff and lovely food. A deck of card was produced after dinner by some of the Bridge enthusiasts.

Day 2: Trip around the city

The South East was anything but sunny on Tuesday but undeterred we hit out for our tour of the city after breakfast. As retired teachers, we are acutely aware that acronyms are  everything in education today and we added some to our store as we heard about the OSIP (????), John Roberts who designed both the Catholic and Protestant Cathedrals; we were also told about some historical fallacies-  poor young John Condon who sadly died at 18  but whose records  mistakenly show him as 14, thereby the youngest casualty of WW1 (a somewhat cynical reason for some politicians to junket to his grave in Europe once a year!) Of course Meaghar and the tricolour were talked about, as were Strongbow and Aoife and Edmund Rice.

No trip to Waterford would be complete without a visit to the Glass factory and that’s where we finished our morning.

After lunch we had three excellent guides in  Reginald’s Tower, the Bishop’s Palace and the Museum of Treasures. Many of us are planning a return trip to spend more time at these sites – really interesting. Shopping, walking, resting, swimming followed before we sat down to dinner in the Tower. A group then took off to Tramore, a seaside by night visit – what a crazy crowd!!!

Some of us had our first taste of  the Waterford delicacy, Blaa, with breakfast (think I’ll stick to Dublin coddle!!!!) before checking out and boarding the bus for the short trip to Kilmeadon Station to experience “the magic of rails’ golden age” and view the stunning Deise greenway on a narrow gauge railway.  We were able to look through the fence as we passed Mount Congreve and view the gardens that had been on our initial itinerary. Curraghmore, the historic home of the Marquis of Waterford was substituted at the last minute.

AND was that a treat – situated just outside Portlaw, Curraghmore is the largest private demesne in the country and residence to the 9th Marquis. I don’t know what strings Rena pulled to allow us a guided tour of this private house and the shellhouse “folly”. But it was certainly one of the highlights of the trip for me.

A welcome tea and sandwiches break was organised en route to Dungarvan at the workhouse in Kilmacthomas before travelling onto O’Mahony’s pub at Durrow. The Greenway Man, Garvan Cummins, gave us a short history of the Ballyvoyle Viaduct and tunnel before the “walkers” set off to experience them first hand.  A small group remained to further sample the atmosphere in O’Mahony’s – an extended stay due to a puncture. 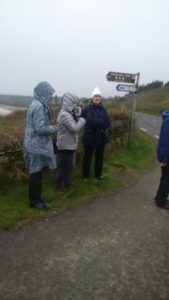 The adventures of those who walked, especially the magnificent 7 who were stranded for over an hour on the roadside above the Copper Coast might be recounted at a later date. Suffice to say, it was a pretty cold and hungry group that arrived in Dungarvan for the evening meal.

However, all’s well that ends well and there was copious praise for Rena as our “Minister for Tourism and Transport” on the way home. This was my second tour with her and she certainly leaves no stone unturned in the organising of trips. My name is down for next year already!!!!!