Skip to content
At our last Kildare meeting, Mary McCarthy handed out brochures that Laois County had devised about services in that county. I was unaware that a similar brochure is available in Kildare.

Thank you to Leixlip member who passed on a copy to me.

The directory includes information and contact details on Community Support Groups, Clubs and Societies, Gov Departments, Education and Training, Gardaí in Kildare, GP’s in Kildare, HSE Services, Home Care/Housing/Alarms, Kildare County Council, Kildare Libraries and some other information. The copy I received had updated information including Garda Stations that had closed since original publication.

You can access the Kildare Directory online.
Here is page from website about history of the publication

A significant development has been the establishment and development of engAGE Kildare, the Forum representing older people in the county. Their Executive has worked diligently through their Forums to communicate with the membership on issues of critical importance. Kildare has taken a particular interest in working on improving relations across the generations in the county and this focus on intergenerational best practice has yielded great results.

Kildare Age Friendly County has also been a partner in the Age Friendly Communities (AFC) Project, funded under the Ireland Wales Programme 2007-13. This funding facilitated a range of innovative project work, including the “If You Were In My Shoes”  Arts Project, Mens Sheds Marvellous Meals and the Go For Life Games in association with the Kildare Sports Partnership.

Special thanks to Jane for photos and account of May trip

Attached a pic of the lovely ladies in Killenthomas Wood near Rathangan.

The day was amazing and as you can see the woods looked like a Monet painting. The forest floor was covered with bluebells and wild garlic. The wild garlic had the most beautiful white flowers and the fragrance of garlic was delicious. All we needed was a piece of steak and a knife and fork 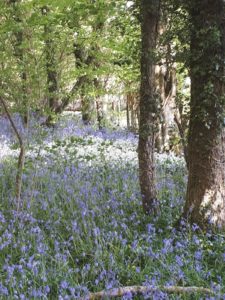 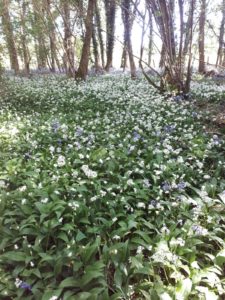 Chairperson, Ted Rooney, welcomed us all to the Killashee Hotel on this gloriously sunny day, promising a short meeting so that we could get back out to the sun! Martin Hoban, Vice Chair was invited to  join the “top table”    personnel in prep for promotion at next AGM. Ted also welcomed the “new” retirees. Fidelma read the minutes of the last meeting which were adapted.

Fidelma gave thorough account of our financial  situation, explaining that this is is how our lovely dinner can be subsidised! Well done Fidelma.

No sign of Billy again, but Mary McCarthy ably accounted for the executive discussions and referred us to CONASC for updates on pay and conditions. Mary advised those retirees who are subbing to take out membership with INTO. A show of hands on who has and uses “MEMBERSHIP PLUS” cards revealed that very few do – it is a hugely expensive scheme that must be questioned as to value!!!! I think a survey is to follow shortly!

Mary had a number of copies of “Laois, Age Friendly County”, an information guide to services for older people in Laois. Mary recommended that much of the information was available from Citizens Advice or Citizens Information

Brian Keyes gave a short account of the Dancing group which although has dwindling numbers is still great craic! they are taking a break for the summer but will resume mid September and hope that some new people will join.

A presentation to Breda (me) for work on website was gratefully received. I was also delighted to get some pics of the Ballycane retirees’ Picnic in Bluebell woods for the site!

I’m sure you’re all receiving email about the new GDPR – a new act on privacy and data protection. There was some discussion on contact details for the 349 members in the branch – opt-in/opt-out …. more about that at a later date!

We finished up the meeting with the Raffle – once again thanks to Fidelma – before adjourning to the dining room for grub and chat.