Another great Kildare Retired Teachers trip – my first one abroad – and it lived up to all expectations.

Even the Ryanair delay in Dublin airport followed by a “mirror of Naas bypass” between Treviso and Trieste couldn’t dampen the spirits of the Kildare retirees.   Following check-in  in  Ljubljana’s  City Hotel, we  took off in packs to find late dinners. It’s quite a small city so we had the geography of the place almost before bed.

We started with a walking tour of the city with Yuri our Slovenian guide, taking in the highlights, the many bridges  that cross the Ljubljanica River- the Dragon bridge,

the Triple Bridge, the Cobblers’ Bridge, the Fountain of the Three Rivers outside the Mestna Hisa (Town Hall) and finishing with a cable car ride to Ljubljana Castle which dominates the skyline of the city. 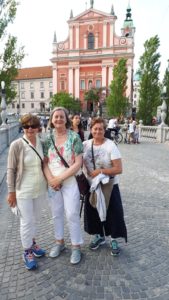 The group broke up  then for an afternoon of leisure. Leisure my eye!!!! Our crowd found a lovely place in the Market Square for lunch before dashing off to the Urban Train (a little electric train that took us around the city again to see some of the morning’s missed sights – Plecnik’s (the architect of Ljubljana) House, the Tivoli Gardens, some theatres and churches.

The river is the landmark for everything in the city and so a group of us took a river ride. It was amazing to see the embankment and hear the many interesting stories of the past. Plecnik designed most of the city with great thought – the willows along the banks were sown as swings for the youngsters to launch themselves into the water as well as to mimic the women who came down to the river’s edge to wash clothes; a cage hung from beside the Cobblers’ Bridge to dunk cheating bakers; Emperor Franz Josef paid for the Dragon bridge so that his Eagle emblems could be displayed, instead the Mayor had 4 copper dragons, the symbols of Slovenia, sneaked in. 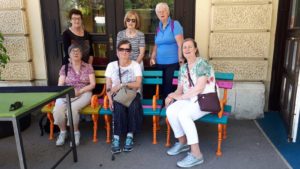 ( Forgot my camera today – if any of you travellers have any offerings sent to me, please. B)

What a lovely surprise this morning – clear blue skies although a storm had been forecast!!! An early start (really hearty buffet breakfast in hotel) as we headed off to the Postonja Caves, reputedly, Europe’s most spectacular caves, 12 miles of chambers and tunnels. Luckily, it can be viewed from a subterranean railway that swerves through the stalactites like a fairground ride with passengers ducking at times to avoid overhanging rocks. One could exit the train for an hour’s walk through some of the chambers; however a few of us decided to carry on by train and relax with ice cream by the Pivka river.

We had time for a  little retail therapy before boarding the bus for the Adriatic coastal town of Piran.  A free shuttle service was available to take us into the centre of the town where there was a market square (Tartinijev trg after the local born violinist and composer Tartini – another famous Slovenian I had never heard of) and lovely restaurants along the sea front for a well-earned lunch. Piran was quite a wealthy little town, its wealth based on the salt produced here. Now it is more a fishing or seaside village.

Vinekoper in Koper was our next port of call. This celler owns most of the vineyards in Slovenia and specialises in a wide range of wines.   My favourites, Refosk was available to “taste” and purchase. There’ll be a few of us checking out O’Brien’s and Aldi and Lidl for Slovenian wines after this!

Our crowd went down the town tonight for dinner – lovely restaurant beside the river where suckling pig (my choice) and veal were served with roast potatoes (unavailable last night!!!) and veg.

The mountains beckoned today – another early start and another glorious morning as we headed first for Lake Bojin, the largest lake in Slovinia. The cable car ride to Mount Vogel gave us spectacular views of the lakes and rivers.

Sitting out in the wooden chalet type restaurant brought the story of Heidi or the Sound of Music to mind. Vogel is a ski resort and there was still some snow with many Alpine flowers peeping through to add to the picture card effect.

Back to the bus for our trip to Lake Bled with its fairy tale scenery – an island church in the middle of the lake which can only be reached by traditional canopied rowing boats, and a castle located on a sheer cliff overlooking the lake and Tito’s palace at the boat jetty (now a hotel).

It was well-worth the effort of climbing the 99 steps to the Church of the Assumption to ring the Wishing Bell inside. The climb to the Castle was more demanding with its uneven surface and extremely steep incline. But there were many helping hands and almost all the crew made it to the courtyard, many making it to the ramparts!!! A fit bunch of retirees!

Lunch by the lake shore before hitting back to Ljubljana was well earned.

We may have wondered why an umbrella hung in every room in the hotel – today we wondered no more – the rain was bucketing down from early morning. Luckily today we were left to our own devices and many chose indoor activities – shopping, galleries, museums. The Emporium (a Kildare Village lookalike including prices) was a favourite but City Park ( in the Blanchardstown vein) was only a taxi ride away. The weather cleared somewhat in the afternoon allowing for some more outdoor sightseeing. 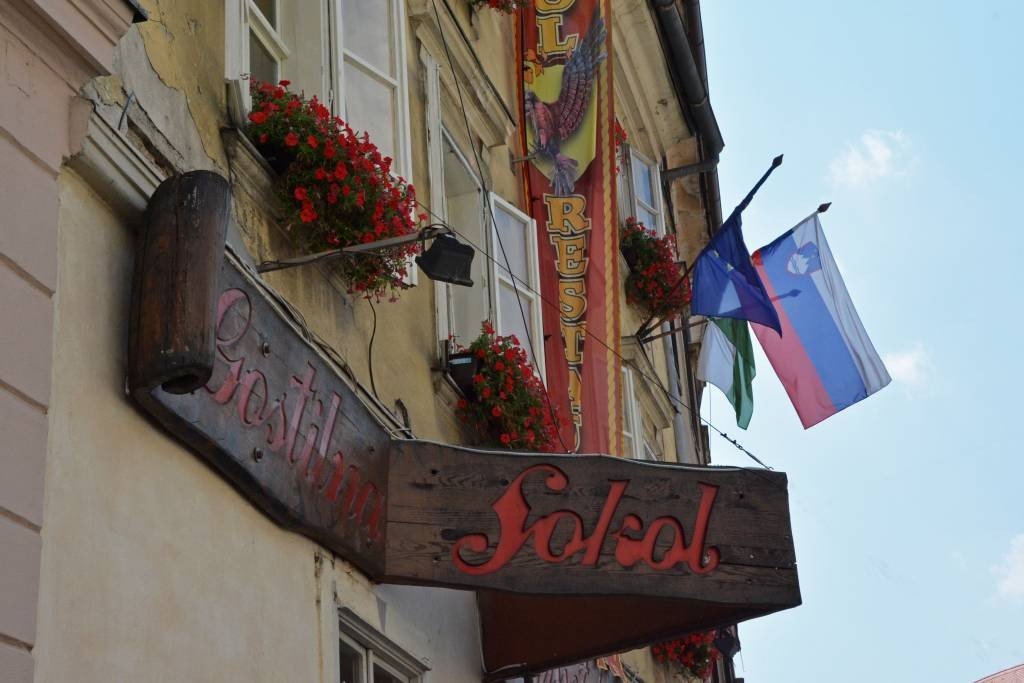 Rena ( and helpers) sussed out a local restaurant Sokol (The Eagle) for our group tonight – lovely meal followed by a sing song – not only are the Kildare Retirees fit – there are some great singers among them. Brilliant way to end the holiday!

A great few days – lots of laughs and stories – however “what happens on tour stays on tour” is a good motto for a blog and there were many funny incidents that will not be recounted here. Our guide Yuri was excellent. The hotel was clean and friendly and located centrally which is a big plus. Food was good but different – Slovenians don’t seem to eat at night and many places were closed by eleven. Everyone noted the cleanliness of the city and the good manners of its residents. Those who visited the churches were impressed with the devotion of young and old, the participation in the services and the most beautiful music/singing. Slovenian wine was excellent and very cheap. The city centre is “car-free” and that certainly lends to the calmness. Small electric bus/cars are available free, originally designed for the elderly but now used by anyone.  Otherwise you cycle or walk.

Well done Rena – where are you going to bring us next year???

One thought on “Slovenian Travellers”

This site uses Akismet to reduce spam. Learn how your comment data is processed.